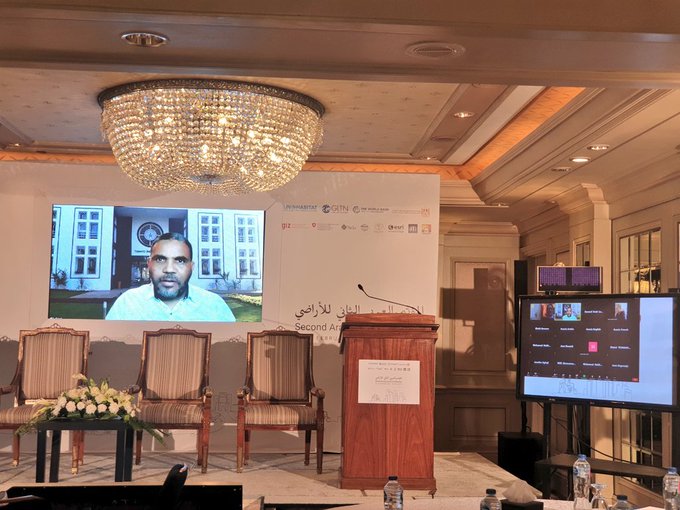 On February 24, 2021, NELGA presented its research findings from a scoping study calling for an increase in capacity-building programs that responds to the needs of urban planning and land development in North Africa during a Masterclass at the Second Arab Land Conference in Cairo, Egypt. The recommendation came from their presentation of a scoping study carried out by the North Africa Consortium to identify the current state, challenges, and areas for growth in addressing land tenure issues in North Africa.

The Masterclass focused on capacity needs to enable good land governance in North Africa and reflected on the study’s findings. The main objectives of the scoping study were to review the current land tenure conditions in the region, to support demand-driven research that meets training and research needs of different land governance stakeholders, to identify the common challenges of the Arab region, and to inform tailored capacity development in meeting the common challenges as identified in the research

The scoping study was carried out in Egypt, Sudan, Mauritania, Tunisia, and Morocco. In the Masterclass presentation, the report identified that though there is evidence of accelerated development in the region’s land governance space, it is important to ensure land processes are established by bridging capacity gaps, reinforcing best practices and technical guidelines mainstreamed to the peculiarities of the region.

“In Egypt, the clear majority of cities are within the fertile Nile river valley and delta, which leaves about 93 % of Egypt’s land vacant. The pressure of urban expansion was further escalated by government’s inability to formulate efficient and integrated policies and plans that urban channel expansion towards new cities (also known as desert cities).” – Land Tenure Systems in North Africa: Scoping Study

Among other recommendations, the study called for the reinforcement of land titling and registration systems to ensure social and economic equity and maximise natural resources, among other things. NELGA’s coordinator at the Africa Land Policy Center (ALPC) Chief, Dr. Joan Kagwanja, was appreciative of the direction the Arab world was taking in its interest in the land governance space, ” It’s important that knowledge exchanged creates linkages for policy and institutional development in North Africa. Land policy and land governance suffer from a lack of capacity. We are interested in collaborating with programs that work to solve this challenge;

NELGA North Africa Coordinator Prof. Moha explained that the Masterclass aimed to show the important role of capacity development to land management, “Capacity development is crucial to addressing land conflicts, cadastral development, urban planning, and land use strengthens the local economy. One of the ways NELGA closes these capacity gaps is by setting up  Masters degree programs on land management and building a partnership program with its North Africa member universities.” He also stressed the need for more training and research actions.

One of the main recommendations taken away from the Masterclass was strengthening academia’s role in coordinating actions between Private and Public partners. Encouraging the integration of new educational paradigms in training and research/smart tools on land governance was also emphasized. It was similarly mentioned that promoting youth/women initiatives for research actions on land governance, especially land right access, is crucial for the way forward. Reinforcing mastering strategies for good spatial and urban development was another point that was raised.

NELGA finally indicated that it offers advice in curricula development to universities and research institutions. It supports research by networking with Arab teams such as the Univerity of Lebanon and the introduction of its Master’s Program in Land Management. It also shares knowledge by publishing findings and research results through the African Journal on Land Policy and Geospatial Science.

Click here to read the Executive Summary of the Scoping Study

Find Presentations from the Masterclass below: